Top headlines from the Board of County Commissioners Meeting 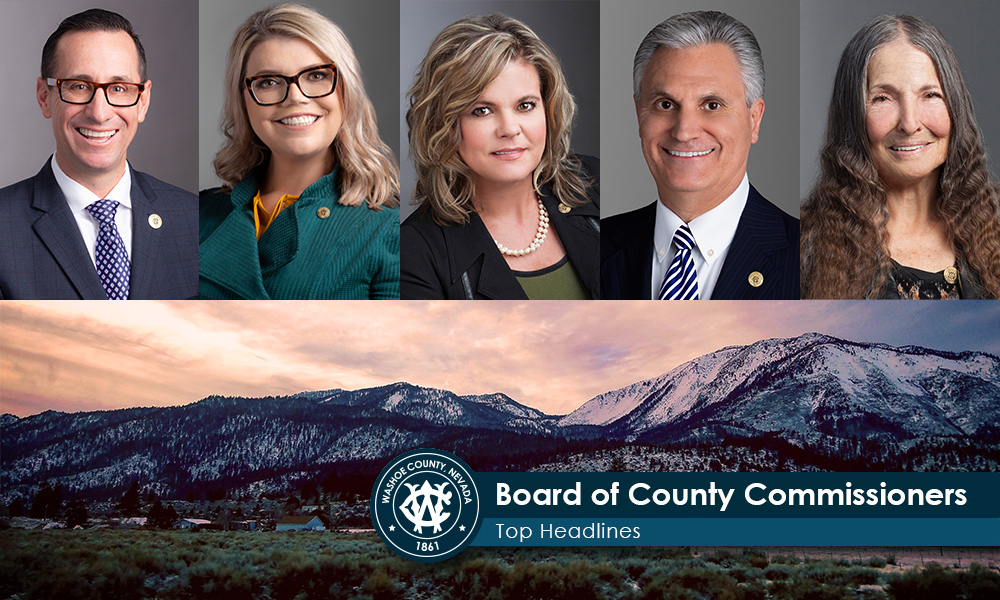 The following are highlights from today’s Washoe County Board of County Commissioners meeting:

1. Sheriff’s Office provides update on Quartz Lane illegal dumping site: A parcel on Quartz Lane has experienced an accumulation of garbage, abandoned vehicles and debris that has been deemed a public nuisance. The Washoe County Sheriff’s Office has been working with the Community Services Department and Waste Management on abatement efforts and outreach to residents in that neighborhood.

Deputy Chief Greg Herrera today provided an update to the Commission on the situation on Quartz Lane. The property has a history of public nuisance complaints, and exemplifies why it’s important to report potential issues early before they grow into situations requiring law enforcement intervention.

Captain Marc Bello joined Herrera and added: “The key is outreach to the community. At no other time has this division been so engaged with the community. We need to get them engaged, get the calls in early, and get the situation handled as soon as the illegal dumping is occurring. We can’t be everywhere at all times, and we try to put our resources where they’re most needed. We really do need community engagement so we can fight those issues before they become a bigger problem like we have here right now.”

2. Board approves library grant to purchase a bookmobile: The Washoe County Library System received a $75,000 grant from the Federal 2021 Library Services and Technology Act, through the State of Nevada American Recovery Act, to purchase a bookmobile. This will allow the library to expand and improve library outreach services to various parts of Washoe County. A bookmobile will take library services to underserved communities, particularly those in rural areas, and homebound seniors or those without access to transportation. Grant funds will also help the library reach residents through internet hotspots, accessible Wi-Fi, and digital content, all of which will support education, health, and workforce development needs.

3. Animal Services receives grant to purchase an evacuation rescue vehicle: Washoe County Regional Animal Services (WCRAS) received a grant from the Dave and Cheryl Duffield Foundation in the amount of $15,000 to be used for animal rescue response during wildfire season. WCRAS will use this grant to purchase an emergency animal trailer that is self-contained and temperature-controlled to house up to 43 animals and all necessary supplies in the event of evacuations during wildfires.

4. Commissioners approve bid for Washoe County Sheriff’s Office detention bunk replacement: Upon Board approval today, the Washoe County Sheriff’s Office (WCSO) will award a contract to Simerson Construction LLC to replace bunks in two housing units and the infirmary at the county’s detention facility. Simerson was the only contractor to submit a bid for this project, coming in $27,000 under the project’s estimated budget of $571,707.

The WCSO has replaced aging bunks over the last several decades, and has a remaining 477 wooden bunks to be replaced with safer, more sanitary bunks.

5. Board proclaims this week as National Apprenticeship Week: Commissioner Alexis Hill read a proclamation declaring this week, November 15-21, as National Apprenticeship Week. Per the proclamation, there are more than 5,000 active registered apprentices undergoing training in Nevada for high-skill construction careers. Apprenticeships provide an affordable pathway to well-paying careers that are inclusive of historically marginalized people, providing a path for all qualified individuals to become apprentices and contribute to Nevada’s industries.