Posted by Bethany Drysdale | Jun 10, 2015 | Board of County Commissioners

Reno, Nevada. June 9, 2015. The following report highlights several important agenda items from the Washoe County Board of Commissioners meeting Tuesday, June 9, 2015. Videos of County Commission meetings are replayed regularly on WCTV (Charter Ch. 193). You may also watch videos-on-demand online.
1. The Board of Washoe County Commissioners appointed Amber Howell as Director of Social Services.
Amber Howell joined the State of Nevada Division of Child and Family Services (DCFS) in 2006. During her nine years with DCFS, Howell served in multiples roles, including a Social Services Chief II and Deputy Administrator for Child Welfare, before being appointed Administrator for DCFS in 2012. Howell was responsible for child protective and welfare service delivery in rural Nevada at DCFS. She also oversaw children’s mental/behavioral health treatments and statewide juvenile justice services, as well as state-operated youth training centers and youth parole. Howell is a native Nevadan and graduate of the University of Nevada, Reno. Howell has committed her entire career to serving Nevada’s population. Howell thanked the Board for appointing her and said she is honored to become Washoe County’s Director of Social Services.
“This is my home where I raised my family and where I want to invest my professional career in hopes of making a positive difference in the lives of families in Washoe County,” said Howell.
2. The Board discussed laws regarding electronic signs and billboards.
Commissioners received an update on the definitions of billboards and electronic signs and voted to continue with the revisions as proposed. Washoe County is asking for citizen feedback regarding regulation of electronic signs and billboards within the unincorporated areas of the County. The public is invited to leave a comment at Open Washoe, an online community forum created for public input. The proposed draft sign code addresses the following: regulation of signage based on property use rather than zoning; regulation of time, place and manner of use for a sign; reduction of sign clutter; laws regarding signs during election periods and the regulation of digital (electronic message display) signs. You can read the proposed sign code here. The code was last updated on January 12, 2012; however, there have not been any substantive changes since 1998.
3. Commission District Special Fund Grants for Districts 4 and 5 were approved.
The Board approved Commissioner Vaughn Hartung’s (District 4) Commission District Special Fund Grant to help the Washoe County Senior Center in Sparks. The grant will help fund services and programs at the Washoe County Senior Center in Sparks to help promote health and independence and encourage seniors to be active.
The Board approved Commissioner Jeanne Herman’s (District 5) Commission District Special Fund Grant to Truckee Meadows Fire Protection District for renovations to the Palomino Valley Fire Station 229 Auxiliary, on Ironwood Road, north of Reno. The grant will help pay for restroom facilities to ensure accessibility and provide additional public meeting space for the community.
Commission District Special Funds were approved in February 2015 to allow County Commissioners to use special funding outside the budget to support the needs of Washoe County residents. Each County Commissioner has $13,122 to spend. Funds appropriated through the Commission District Special Funds must provide substantial benefit to residents of Washoe County. Grant recipients must be a non-profit organization, created for religious, charitable or educational purposes, or a government entity.
4. A grant was accepted from the Nevada Aging and Disability Services Division for programs to help seniors.
The Board accepted a $109,985 grant for the Nutrition Services Incentive Program, which is one of the Older Americans Title III programs that serve seniors. The grant goes toward serving seniors healthy, nutritious meals at senior centers and deliver them through the Meals on Wheels Program. More than 1,000 Washoe County seniors receive a free, nutritious meal every day from Senior Services.
5. Airport Authority Board and Library Board of Trustees appointments were confirmed.
The Board appointed Lisa Gianoli to the Reno-Tahoe Airport Authority Board of Trustees, with a term effective July 1, 2015 through June 30, 2019. Gianoli has experience working in local government finance since 1981, including six sessions at the Nevada Legislature.
“I want to thank all of the candidates for applying and taking the time to interview. We had a good crop of candidates, but I believe this Board made the best decision in choosing Lisa Gianoli,” said Commission Chair Marsha Berkbigler (District 1). “Lisa is smart, understands how Washoe County and this community work and will serve us residents well.”
The Board also appointed Wendy Alderman and Zanny Marsh to fill two vacant seats on the Washoe County Library Board of Trustees, with both terms effective July 1, 2015, through June 30, 2019.
### 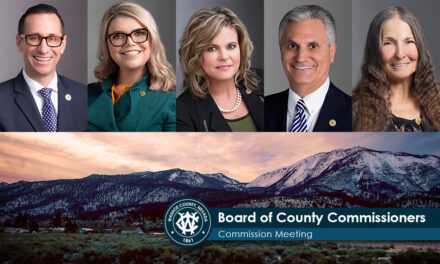 Upcoming Board of County Commissioners Meeting

Highlights from Washoe County Board of Commissioners meeting