Reno, Nev. July 8, 2020 – The Washoe County Health District (WCHD) and the University of Nevada, Reno, School of Community Health Sciences completed a public health surveillance study to better estimate the prevalence of COVID-19 in Washoe County.
The study (summary can be found here) included 1,270 randomly selected households from 128 unique census blocks in Washoe County. There were 234 adult participants who responded and provided a blood sample for a COVID-19 antibody test June 9-10. The results from the 234 tests were weighted based on the current adult population and demographic data (race/ethnicity, age and sex) available for Washoe County.
The results, with a 95 percent confidence interval, show:

True number of infections in Washoe County is higher than what’s reported. An estimated 2.3 percent of adult Washoe County residents are estimated to have been infected with COVID-19 as of June 10 according to the study. That means that approximately 8,230 adults may have been infected by that date (only adults 18+ were eligible to be tested). That figure is at least 4.5 to 5 times higher than the number of cases actually reported on June 10, which was 1,832 (Includes all ages).
Percentage of COVID-19-related deaths is lower than what’s reported. The case fatality ratio (CFR) in Washoe County from COVID-19 based on polymerase chain reaction (PCR) confirmed positive cases was 3.66 percent on June 10; however, the study estimates a 0.81 percent CFR based on the estimated number of infections which had occurred by that date. On June 10, there were 67 reported COVID-19-related deaths in Washoe County.
Hispanic community under-represented: About 11 percent of study participants identified as Hispanic, which is much lower relative to both the general population as well as the current proportion of COVID-19 infections in Washoe County Hispanic Community. Current census data shows that persons who identify as Hispanic make up about 25 percent of the overall population in Washoe County. Among the 3,295 cases reported on July 7, 40.8 percent of those cases identified as Hispanic.

The methodology for selection of random households is a modification of what the Centers for Disease Control and Prevention (CDC) uses in the event of public health emergencies. The surveillance project was a partnership between WCHD, the University of Nevada, Reno, School of Community Health Sciences and the Nevada State Public Health Laboratory.
Media: Representatives from WCHD and the University will be available for questions on Wednesday, July 8, at 11:30 a.m. via a virtual press briefing. This briefing is part of the Regional Information Center’s weekly COVID-19 briefing that local media already have access to.
More info: Scott Oxarart, Communications Manager for WCHD (775-276-1021, soxarart@washoecounty.us) or Kerri Garcia Hendricks, Executive Director of Marketing and Communications University of Nevada, Reno (775-240-0283, kerrig@unr.edu). 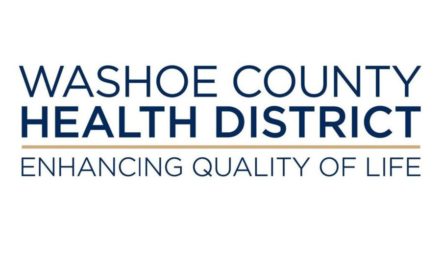